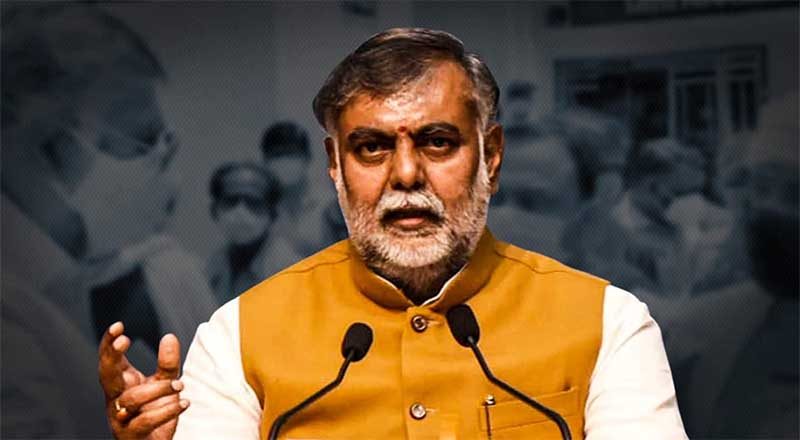 A video purportedly showing Union Culture Minister Prahlad Patel telling a man who sought oxygen cylinder for his ailing mother that he would get “two slaps” if he spoke rudely went viral on Thursday.While the opposition Congress took swipes at him over the incident, the Union minister of state could not be contacted for comment on the video.

Patel, who is the MP from Damoh, was inspecting the district hospital here two days after oxygen cylinders were looted from the hospital.

A man approached him saying his mother, a COVID-19 patient, needed oxygen cylinder. She was told she will get one after 36 hours, but it was yet to be provided, he said.

As the man raised a finger at Patel while talking, an irked minister gestured him to lower his finger, and said, “If you spoke in this manner, you will get two slaps. (Aisa Bolega To Do Khayega).”

The man replied that he was ready to accept the slaps and his mother was already taking the blows. “Tell me what to do,” the man was heard saying in the video. Apparently realising that the incident was being recorded, Patel said to the man, “Calm down.

Is anyone refusing you (the oxygen)? The man replied in a feeble voice that he had indeed been denied oxygen. As the video began to circulate, state Congress chief spokesperson K K Mishra tweeted, “Before the by-poll, each virus patient of Damoh was driven to Bhopal or Jabalpur by the cars of MP ministers and admitted to hospitals.

“Now when a BJP activist was requesting for oxygen to save the life of his mother, Union Minister Prahlad Patel was talking about slapping him twice as the work is accomplished (election is over).”

The Union minister could not be contacted for reaction. District BJP president Pritam Singh Lodhi refused to comment, saying Patel himself should be contacted.

On Tuesday night, family members of patients admitted at the Damoh district hospital forcibly took away oxygen cylinders. The hospital management had to call in police to bring the situation under control.

No restrictions on movement or gatherings had been imposed in the district which had an Assembly by-election on April 17.