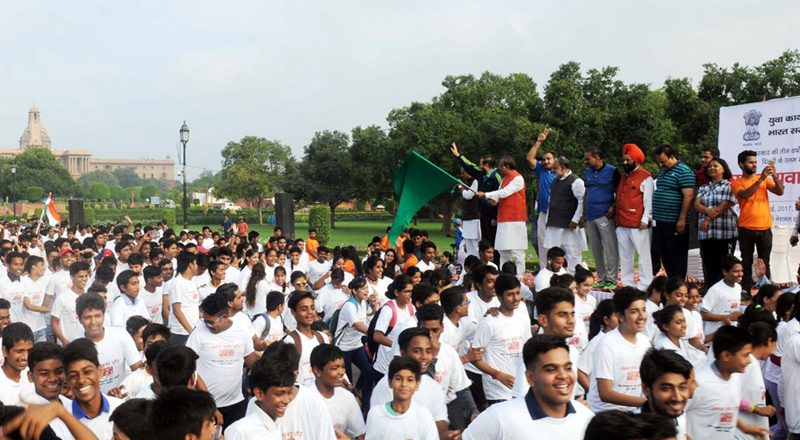 Union Minister of State (I/C) Youth Affairs and Sports Shri Vijay Goel flagged off the 12th and the final Slum Yuva Daud in Karol Bagh with participation of around 6000 youngsters. The participants were encouraged by Union Steel Minister Chaudhary Birender Singh and Olympian wrestler Sushil Kumar. The Daud started from Jhandenwalan Devi Mandir and concluded at Ajmal Khan Park. Each participant was awarded medal and certificates.

The youngsters from various Delhi slums appreciated the Ministry’s efforts to provide them a platform like this. Shri Goel said that “slum Yuva Daud was an initiative to motivate the youth to work for a better tomorrow and engage them in constructive activities to deter them from drug abuse, criminal activities and terrorism etc”.

The Ministry would also prepare mini-youth clubs in slums who will work for the development and cleanliness of their respective slum, and ‘we will also organize competitions like football, volleyball etc. which would enable us to find hidden sporting talent from these slums”, he added.

Union Steel Minister Chaudhary Birender Singh praised the initiative of Slum Yuva Daud and said, “Youth is the backbone of our nation and such activities help in their all-round development and encourage them to work for nation building.

Olympic medallist wrestler Sushil Kumar who came to join the Slum Daud for 2nd time called the initiative a golden opportunity for future sportspersons to shine. He stated that such efforts will go a long way to create sports culture in the country and help the Ministry to tap talented youth.

The Slum Yuva Daud is part of the ongoing Adopt Slum Campaign initiated by the Ministry of Youth Affairs & Sports and Nehru Yuva Kendra Sangathan. Total 12 Slum Yuva Runs were organized across Delhi with a combined participation of 60,000 youth.