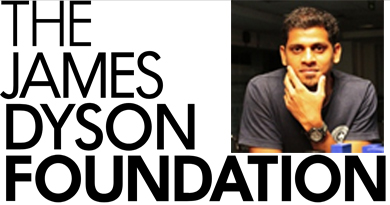 Asish Mohandas witnessed the plight and pain of an old lady while being shifted from one stretcher to another by lifting. Upon researching further and speaking to more than 50 people including doctors, nurses, ward boys etc., it became evident that there is no existing patient transfer mechanism that can efficiently transfer patients without causing any pain to the patients. With the aim to solve this problem, and to eliminate involvement of manual labour in shifting patient, Asish designed MAATTAM retrofit patient transfer system as a part of his final year degree project. MAATTAM, RETROFIT PATIENT TRANSFER SYSTEM has been selected as this year’s winner for India James Dyson Award 2017 and will now be running for the International Winner Award and prize money of £30000.

This product is of particular importance to India as Healthcare has become one of India’s largest sectors – both in terms of revenue and employment. Healthcare in India is also cost competitive compared to its peers in Asia and Western countries. The cost of surgery in India is about one-tenth of that in the US or Western Europe making it a hotbed for medical tourism. Even though Indian hospitals are cater to such large numbers of patients from India and abroad, they are still following the old mechanism for patient handling often causing inconvenience and pain to the patients. The product has huge potential in other global markets as well as Healthcare is amongst the biggest sectors for every economy.

“I resolved to design MAATTAM as I surveyed amongst doctors, nurses, ward boys to conclude that the majority of hospitals and clinics in India does not have efficient stretcher that transfers patient without any pain. I wanted to design a simple, affordable and retrofit solution which would most appropriately solve the problem of patient transfer in hospitals and create a better experience, every time the patient is getting transferred. It will also ensure evading the problem of spine disorders while shifting. I strongly felt that creating medical equipment like this would impact and help the needy at large.” said Asish Mohandas.

The mechanism works similar to a treadmill having a moving platform with a wide conveyor fabric belt and rollers on either ends. MAATTAM being a retrofit can be put on top of any wheeled stretcher with flat top surface and height adjustment facility, converting it into a transfer stretcher. To check the functionality a 1:2 scale prototype was fabricated and was tested by transferring a mannequin and was later tested with a human body, by transferring the child from a rest unit to the stretcher.

MAATTAM, Retrofit Patient Transfer System will receive £2,000 along with James Dyson Award Certificate from the James Dyson Foundation, and progress to the international stage of the award. Asish aims to commercialise this product and is in process of developing the full-scale model of the retrofit stretcher which would be able to transfer an adult of height up to 180 cm and weight of maximum 95 kg. He is also planning to further tweak the model to be used for transferring accident victims on the road. There is a large occurrence of worsening the condition of accident victims due to mishandling of victims from road to hospitals due to ineffective patient handling mechanisms.