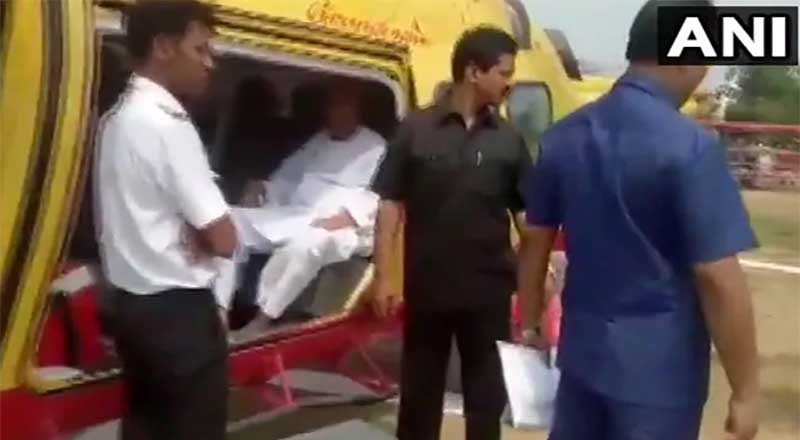 In a shocking incidence when the Squards from the Election Commission’s flying squad checked Naveen Patnaik and HD Kumaraswamy’s choppers were checked by Election Commission’s flying squad and scanned the luggage, whereas oppositions complained about there is no checking with the neither any BJP party members and officials  and named opposition has accused the Centre of vendetta politics.

As per the report published, the Country is to go for the second phase of polls on Thursday, which is less than 24 hours before the the Election Commission’s flying squad is swooping down on houses of political leaders, their vehicles and choppers, to check for unaccounted cash, allegedly being used by parties to bribe voters. Choppers and cars of three senior politicians – Naveen Patnaik, HD Kumaraswamy and BS Yeddyurappa – were checked in the last 48 hours. Raids were also carried out overnight at DMK leader Kanimozhi’s house in Tamil Nadu’s Thoothukudi.

Officials of the flying squad stopped the chopper of Odisha Chief Minister Naveen Patnaik, as it was about to take off, at a helipad in Rourkela today and scanned his luggage. The Chief Minister was seated in the chopper as election body officials inspected cases. The officials however have not said if anything objectionable was found.

“Why should I be afraid of I-T raids…the way I-T is working – is it right?” he was quoted as saying by news agency PTI.

The tax men had carried out raids at multiple locations in Bengaluru, Mysuru, Mandya,Ramanagara, Shivamogga and Hassan, triggering strong reaction from Mr.Kumaraswamy and Congress leaders in Karnataka, who accused the Centre of vendetta politics.

Mr Kumaraswamy hit out at PM Modi, referring to a box, allegedly unloaded from his helicopter at Chitradurga, during a recent visit. Opposition leaders slammed the election body for not looking into a video of a black case, allegedly unloaded from the PM’s chopper and carried away in an SUV. Opposition leaders cited the video, widely circulated on social media, and demanded that the election body must investigate what was in the box and whose vehicle was used to carry it.

On Tuesday, the flying squad inspected the luggage of former Karnataka Chief Minister and state BJP chief BS Yeddyurappa, at a helipad in Shivamogga. The Election Commission has however not disclosed what was found.

Earlier, the tax department had seized Rs. 1.66 crore in cash during raids conducted across Karnataka. On March 28, a total of 24 premises were searched by the I-T department.

(With inputs from ANI & PTI)