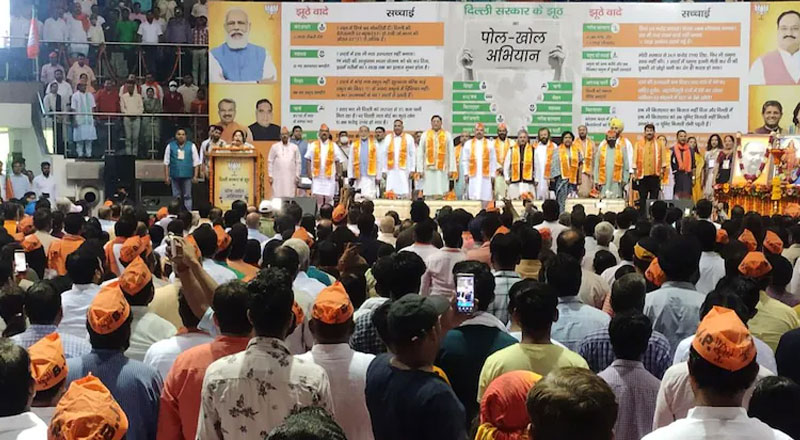 The Delhi unit of the BJP launched ‘Pol Khol Abhiyan’ on Wednesday with the goal of “exposing” the Kejriwal government.

Delhi unit chief Adesh Gupta attacked Arvind Kejriwal and said that nearly one lakh students are made to fail every year to maintain good results.

“Kejriwal is a liar. He boasted about providing 12 lakh jobs but the RTI reply says less than 500 jobs have been created since he became the CM. He has no money to distribute free ration like the BJP. Instead, he has given land and money to the illegal Bangladeshi and Rohingya migrants,” said Gupta.

Gupta continued, “There are no principals in many schools, there is a shortage of science teachers in many schools, but the government boasts of revolutionising the education system. Every year, nearly one lakh students are being dropped to maintain good results in the board exams. This is criminal. The government can’t play with a child’s future.

Gupta also commented on the government’s ‘failure’ in cleaning the Yamuna and providing water. Urging party workers to reach out to the public about these issues, he said, “Kejriwal had promised to make Yamuna clean but failed miserably. Eighty percent of Yamuna’s pollution happens because of its two per cent stretch in Delhi. The government also failed to provide water for the same reason. Untreated waste and sewage is going directly into the river and the government is busy backing water tanker mafias. The Kejriwal government gave a loan of Rs 57,000 crore to Delhi Jal Board, but nobody knows where it has gone.