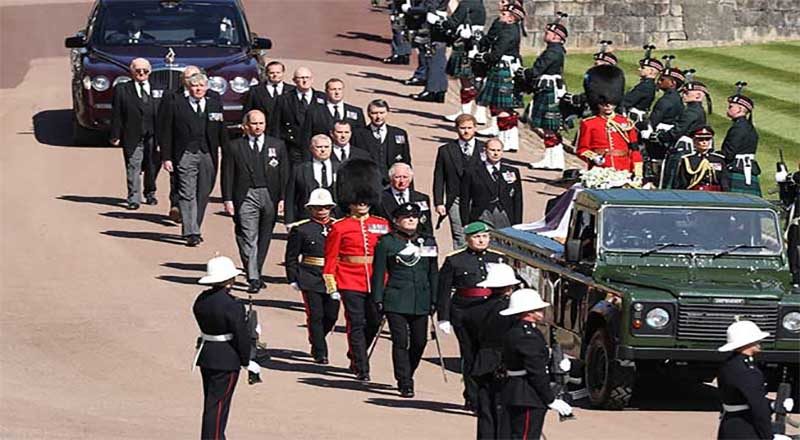 The 94-year-old monarch, dressed in mourning black and a black face mask, sat inside St George’s Chapel at Windsor Castle, as Prince Philip’s coffin arrived on a bespoke Land Rover which he designed himself.

Queen Elizabeth II led Britain in a one-minute’s silence in memory of her late husband, Prince Philip, as she bid him a final farewell at a funeral restricted by coronavirus rules but reflecting his long life of military and public service. The grandmother of Prince William and Prince Harry had played a key role in uniting the family in this difficult time by reuniting both the Prince William and Harry as they joined the Queen at St George’s Chapel to remember their late grandfather, Prince Philip.

The 94-year-old monarch Queen Elizabeth II, dressed in mourning black and a black face mask, sat inside St George’s Chapel at Windsor Castle, as the Duke of Edinburgh’s coffin arrived on a bespoke Land Rover which he designed himself.

In a break from tradition, senior members of the British royal family will not wear their military uniforms at the funeral of Prince Philip, to take place on April 17 at Windsor Castle. The decision has been taken by Queen Elizabeth in a bid to save embarrassment to Prince Harry, her grandson and Duke of Sussex, and avoid potential embarrassment involving Prince Andrew, her second son and Duke of York.

Prince Harry lost his military titles after he stepped away from his royal duties last year. Protocol thus dictates that while he can still wear his medals, he can’t wear his uniform, and would have had to wear the medals on a civilian dress, making him the only senior Royal not in uniform.

Prince Harry has served in the British Army for a decade, including twice in Afghanistan. However, when he gave up his royal duties, he was stripped of his three honorary titles – Captain General of the Royal Marines, Honorary Air Commandant of RAF Honington and Commodore-in-Chief, Small Ships and Diving, Royal Naval Command.

A military gun was fired to signal the start of the solemn tribute, which was observed in shops, railway stations and at sporting events across the country. The ceremony with just 30 mourners took place entirely behind the castle’s stately walls, with the public urged to stay away because of the pandemic.

Prince Harry was one of only 30 guests in attendance at the funeral, due to the COVID-19 pandemic.

He flew from America to the UK last week and has been self-isolating at Frogmore Cottage ahead of the service, while Meghan stayed at their home in Santa Barbara, California with their one-year-old son Archie Harrison.

Harry joined family members including the Queen, Prince Charles and the Duchess of Cornwall, Princess Anne and Prince Andrew, the Duke and Duchess of Cambridge, Peter Philips, Zara and Mike Tindall, Princess Beatrice and Edoardo Mapelli Mozzi, and Princess Eugenie and Jack Brooksbank.

Whereas, wife of Prince harry, Meghan was advised against travelling by her doctor due to her pregnant with her second child, was advised not to travel on medical grounds. Harry has had to quarantine since arriving from Los Angeles.

Queen Elizabeth arrives in the Royal Bentley at the funeral for her husband, Prince Philip. At Buckingham Palace, the Queen’s central London home, Cardiff-born chef Santosh Singh laid purple tulips to mark the end of an era.

The Duke of Edinburgh — described by royals as “the grandfather of the nation” — died on April 9, aged 99, just weeks after being released following a month-long stay in hospital for treatment of a heart condition and an infection.

It is the first public meeting of the pair since Prince Harry stood down from royal duties more than a year ago. Last month, Prince Harry hinted at ongoing difficulties between him and Prince William. Harry is believed to have spoken to William, Charles, Eugenie and Beatrice in an attempt to ‘park any disputes’ ahead of the funeral.

More than 730 members of the British Army, Royal Navy and Royal Air Force, in ceremonial dress and heads bowed, took part, lining the short funeral procession route through the immaculately trimmed grounds of the historic castle. A minute gun fired and a bell tolled during the sedate, eight-minute journey.

The Queen led mourners, as they paid their respects to the man she once called her “strength and stay”, and whose death closes a remarkable chapter for Britain’s most famous family. The congregation is mostly close family, including the couple’s four children: heir to the throne Prince Charles, 72, Princess Anne, 70, Prince Andrew, 61, and Prince Edward, 57.

Also present are Charles’ eldest son William, 38, who was joined by younger brother, Harry, 36, for the first time since his shock move last year to the United States.

“My grandfather was a man of service, honour and great humour. He was authentically himself, with a seriously sharp wit, and could hold the attention of any room due to his charm—and also because you never knew what he might say next,” read Harry’s message. “He will be remembered as the longest reigning consort to the Monarch, a decorated serviceman, a Prince and a Duke. But to me, like many of you who have lost a loved one or grandparent over the pain of this past year, he was my grandpa: master of the barbecue, legend of banter, and cheeky right ’til the end.”

All eyes are on the brothers — whose mother was Charles’ first wife, princess Diana — after a reported falling out over Harry’s move to California with his American wife, Meghan, and their stinging criticisms of the royals. Between them was their cousin, Princess Anne’s son Peter Phillips, 43, which has only fuelled further media rumours of the rift, even if it reflected royal protocol.