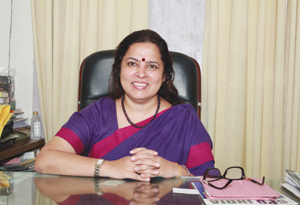 A woman of substance, Smt. Meenakshi Lekhi, Indian Member of Parliament in the Lok Sabha was upright in stating of how she always found her calling in working for the society, which does not pertain to just issues revolving around women but many other issues that continue to cripple the Indian society. One of them is the public library movement in India that is getting further boosted with the keen involvement of the MP herself and the transformation measures that she has initiated to revive these libraries. The idea behind this project is to inculcate the habit of reading in people and also for making the library a place that can be frequented by people who find interest in reading but unable to do so because of dearth of space. An excerpt from the interview –

Please tell us something about the transformation in the public libraries that you are initiating?

The transformation in the reading culture is what we constantly discuss when children are growing up. Early reading habits make an adult who is far more sound in terms of emotional stability, cultural values and knowledge. The public library space or the exposure to books is something which needs to be inculcated at an early age. We took this initiative with Angelique Foundation and decided to give young kids exposure to public library by renovating a couple of these libraries, which were either lying defunct or were in a dilapidated form or were not utilised properly. The idea was to create some space where people could happily spend time reading, both hard cover books and on computers because e-learning is as much part of learning as the normal books. We have started a couple of projects; at least 54 of them are running now in NDMC, Delhi Cantonment and MCD areas.

We today find a decline in the reading habit among youths today. Do you have any innovative idea through which they can get attracted to these public libraries?

If we are talking about youths who are in their teens or are in early adulthood and if they have focused on education only with the intention of passing exams, it is very hard to change those habits at later ages. But many a times there is a dearth of good places or a library for people, who look for such spaces to read or study. So we are catering to the people who have these reading habits; especially there is a large segment of enterprising and upcoming India who generally comes from the lower income strata, has small homes and very less space for quiet reading. So we are providing them with space and facility with better quality books, internet and e-libraries so that those who are preparing for exams can avail these facilities.

Colony-wise, we have built these facilities for 100-150 people. I also got to know that there are people who pay 3000-3500 for a small reading space because in urban areas paucity of space is a major challenge. Particularly in my constituency, New Delhi I find people waiting in queues to get inside the library. So we decided to give all these for free, so that children with greater interests and higher goals start flocking. We have also decided to put up a coffee machine.

What kind of memories do you associate with a public library?

I have very pleasant memories of a public library in my growing years. I grew up in Delhi and as a small child we used to have many functions organized in the public library and we used to look forward to attending those functions and conferences. Winning those debates and extempore speeches used to be a big achievement because as a prize we used to get a good book. So that ways I was able to build my own library over the years with the books that I got as a prize. I think a book can be your biggest companion and whatever you read in a book stays with you forever in the form of memories. It is the best investment one can make on books. The more time you spend on reading, there is a higher success of retaining things which otherwise would not be possible if you are not reading. Also your thinking power improves knowledge gets widened, emotional quotient gets better. India is a country that has culturally promoted learning, we are people who respect Goddess Saraswati a lot and we just need to go ahead and promote that.

Apart from the public library movement, what other initiatives and causes do you associate yourself?

I got to work on women issues which are close to my heart but that is not the only identity I as a person have. Women issues are important because I feel being a woman if I don’t stand for my own agenda who else will?

I started off as taxation & criminal law practitioner and I had those cases in hand that brings you to the limelight, which probably winning a good excise case will not. But if you help winning a case for a woman who have been a rape victim then that becomes news too. I obviously take pride in the kind of work that I have done not because I am a woman but because in spite of my occupation, I stood for women and I still work for them. I even made an app for women apart from the cases which I have fought during my career as a woman lawyer. The name of the app is Raksha; this was the time when nobody did this kind of work and the year was 2014 when I had won the elections.

Good initiatives are taken care of and people get benefitted. Likewise Open gym was another initiative; I got elected in May and in October the first open gym was launched. Open gym is one good initiative when we talk of the ecology and energy conservation. When you look at the lifestyle of women around us, they will never spend the money to go to a gym. Even those who can afford to go to a gym will not do it because they cannot remain away from their homes because of work. They fail to understand that physical exercise is as important as any other activities that they do in life. So both affordability and mental conditioning happen to be the challenges to people that stop them from going to the gym. Opening Open gyms offered a solution to all these. Also, open gyms are in open areas and are absolutely low on energy.

I came across a case study that documented the lives of 2 lower income women, for whom affordability, time, mental & physical health were some issues and how their perception towards their lives changed after they started using open gyms. They took out time to go to the gym, because it is situated inside a park and in close proximity to their house. Earlier whatever spare time they had, they used to get hooked to TV, which resulted in high BP, and a couple of other health issues. Also they started bonding while working out at the gym together and gave them a respite from their lonely life they were leading earlier.

I feel good that whatever steps I have taken are helping people, because at the end of the day whatever projects you undertake should yield positive result.

I have always worked for women issues and I take pride in doing that. Maybe because I am from the same gender and that gives them the confidence to come up to me and talk about the issues they face. When women need to be drawn out, the right person has to be on the forefront for the success of the project. Plus faith and trust factor are very important. And it is the trust that makes people leaders and others will stand by you.

Any message you would like to give through our medium on the kind of work you are doing for the society?

Women health is the most neglected area, not only in our country but elsewhere in the world. No women go out to get their health check-up done, unless a major problem crops up. When I was elected, my first fund went for funding 4 medical health vans that had X-Rays, blood testing facilities and other devices. Mostly we had to deal with issues like anaemia, pre-menopause & menopause and so on. I realized that since women do not get the time to come out of their homes after doing their regular household chores, sending the medical unit into their vicinity would be the best possible option. There they can avail all the medical facilities. The best part is that these units are connected to the Cloud, and every data scanned and entered goes into the cloud. So every time a woman comes, her medical records can be retrieved and the treatment carried out accordingly. I was also surprised to find out that many women have constipation as a problem and nobody would even talk about it and so they don’t know its cause and cure.

I certainly feel providing clean water, building toilets, and most importantly making people aware of health and sanitation issues can actually take away most of the lifestyle diseases. And so I will continue to work in these areas.