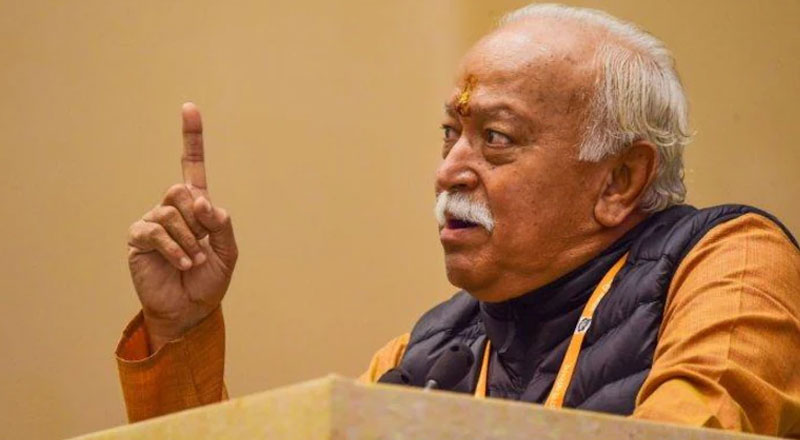 Mohan Bhagwat, the chief of the Rashtriya Swayamsevak Sangh (RSS), stated on Thursday that violence benefits no one.

Rashtriya Swayamsevak Sangh (RSS) chief Mohan Bhagwat on Thursday said violence does not benefit anybody and emphasized the need to bring together all communities and preserve humanity, comments coming against the backdrop of recent clashes between different groups in several parts of the country.

He also underlined the need for establishing a Sindhi university in the country to ensure survival of the Sindhi language and culture. The RSS chief said India is a multi-lingual country and each language has its own importance.

Bhagwat was speaking as the chief guest at the ‘Gaddinashini‘ programme (ceremony to assume a religious seat) of Sai Rajeshlal Mordiya, the great grandson of Sant Kanwarram, at Kanwarram Dham on Bhankheda Road near here in eastern Maharashtra.

Hundreds of Sindhi community members from Amravati district and different parts of the country attended the ceremony.

The RSS chief asserted no one benefits from violence and called for bringing together all communities and preserving humanity.

“Violence does not benefit anybody. The society to which violence is dear is now counting its last days. We should forever be non-violent and peace-loving. For this, it is essential to bring together all communities and preserve humanity. We all need to do this work on priority,” said Bhagwat.

The RSS leader’s remarks came against the backdrop of communal clashes during Ram Navami and Hanuman Jayanti celebrations in nearly half a dozen states, including the BJP-ruled Madhya Pradesh and Gujarat.

Observing that the Sindhi community has contributed richly to the development of the country, Bhagwat stressed the need for having a Sindhi university to promote and preserve the Sindhi culture and language.

He said the Sindhi community has to put pressure on the central government to get its demand for a university fulfilled.

“Be it this government or any other, it acts on pressure of society. Social pressure is like petrol to the government. If you desire to see your dream of a Sindhi university becoming a reality, you need to put pressure on this government,” Bhagwat said.

Speaking on the occasion, Jagatguru Shankaracharya Wasudevanand Saraswati Maharaj said, “Undivided India is the dream of all in the country and this dream will certainly be realized during the tenure of Prime Minister Narendra Modi.”